A good bit of advice from writing courses is to write about grandparents. The amount of time that has passed since talking to them (or, probably, even thinking about them) gives the proper buffer for insight that more immediate situations don’t have. Also, there is the effect of family history, and the personal knowledge that comes from examining our direct ancestors. It is a subject anyone can relate to. Stories about our grandparents can translate to interesting writing that a novice might not be able to produce in any other way.

The seeds of Kim and I came from four women and four men. I knew four of them personally.

Kim’s grandmother on her mother’s side, Lenora, was a nurse at Walter Reed during World War II. Lenora’s parents both died in the Spanish Flu epidemic when she was ten years old. I believe the year was 1918. She was raised by an aunt in Virginia. (I hope I am getting these facts right; if not, Kim or her mother will tell me and I will have to change them.) Kim’s grandfather, Charles, was severely wounded in the Ardennes in 1945. 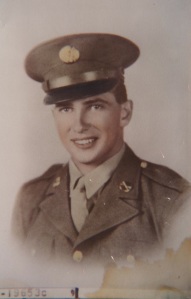 He was shot and fell into a trench full of freezing water, where he was forced to spend the night before being carried back to his own lines. He recovered at Walter Reed. I have heard a few stories about him, and there was a severe color portrait of him hanging in Lenora’s room at Kim’s house when we first met. Due to the wound he recieved, his leg was amputated several times, with progressively more and more tissue being removed. One of the stories involves him feeling a crawling sensation under his cast. Of course it turned out to be maggots. Lenora was his nurse, and wanted nothing to do with him because he was fourteen years younger than she was, but he persisted and they married. I have a feeling that Lenora was a lot of fun. She liked to smoke cigarettes and dance the Charleston.

Lenora told us once how the owner of the Hope Diamond, Evalyn Walsh McLean, liked to bring it to Walter Reed and let the convalescing soldiers hold it. It would be tempting to say the story was fantastic, but I did a little reading on the Hope. Sure enough, there was a passage about how Evalyn Walsh McLean liked to take the stone to Walter Reed and let the soldiers play with it; they would throw it back and forth, and pretend to drop it out the window.

Kim told me a story about Charles chopping firewood in the middle of winter, refusing to wear a coat because the frostbite he had received during his ordeal made him impervious to cold. Although Charles passed from complications due to his injury long before I met Kim, Lenora kept his false leg under her bed until the day she died, and Kim’s brother Charles still likes to use it for Halloween costumes.

Lenora was a sweet woman. By the time I knew her she suffered from macular degeneration, so much so that she often lit the wrong ends of her cigarettes. We would go into her room and find four or five of them scattered around her chair with the filter tip slightly scorched. She suffered even more horribly from arthritis. She liked to listen to books on tape, and was very supportive of my dream of becoming a writer. I remember two things about her most. Usually Lenora kept to her own room, but we knew she was lonely, and one day when I was living with them, Kim and I decided to set up a table, make lunch, and invite her to eat with us. I don’t think we talked about much at all, but I could tell how grateful she was, and I wish we had done more of that. The second memory is worse, though clear, so I shall include it. When she became older, Lenora needed a nurse, and I can vividly remember holding her body up so that she could go to the bathroom. She was so weak, and it was the first time I really understood what it means to grow old. I know that might seem like a bad memory to list, but the dignity and strength with which she faced her troubles did not disgust me. Rather, it was inspiring. Writing this I am amazed at what people of other generations had to deal with in their lives, and how easy we have it.